Do I Need Surgery for My Low Back Pain? 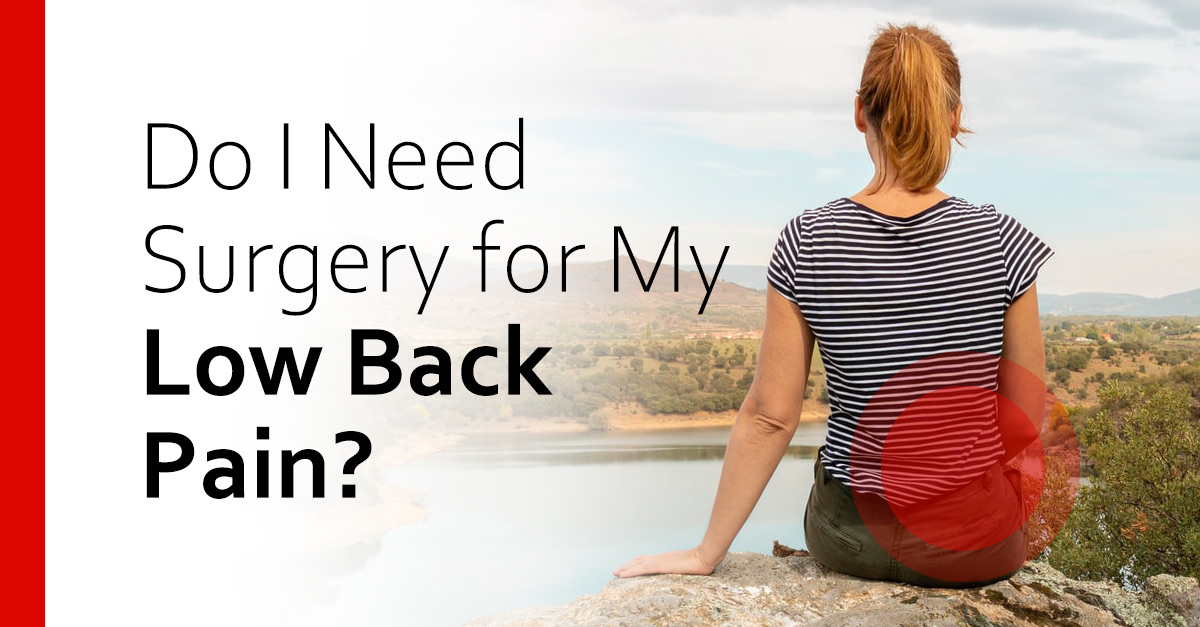 Susan likes to work out in the mornings, sits during the day for her job, and likes to walk at night. Susan also used to like to lift very heavy weights in a sport called powerlifting when she was younger. She is now a little older and has retired from the sport. Each morning she still loves to challenge herself with weights and her exercise bike. Several years ago, Susan had some hip pain, and her doctors decided she needed new hips. After her hips were replaced and she completed physical therapy, Susan started noticing something weird. She was having low back pain and a pain that shot into her leg. “This is new,” she thought. “It will go away.” But it did not.

Increased Back and Leg Pain

Little by little Susan began to struggle through her workouts. She was determined to keep herself moving because it was the exercise that helped her feel good. Her walks at night slowly became challenging. She wasn’t able to walk as far or as fast as she once could, and now her back and leg were very sore a few minutes into her walks. Susan began to miss workouts due to the pain. She didn’t walk as much, and her back and leg hurt even when trying to work or wash the dishes. Susan started to get desperate for answers and relief from her pain.

Several places told her she may need surgery for her leg pain. Some gave her pain-relieving shots, but the relief from the shots didn’t last long! She became more discouraged and was able to do less and less because of her pain. She didn’t know what to do. It looked like surgery was her only option.

Susan’s husband, Carl, also had low back pain, and he went to a chiropractor referred to him by his personal trainer. In just a few visits, Carl was feeling great and could work out without having pain! With hope renewed, Susan decided to try this chiropractor as well. Susan was skeptical, though. “What could this person do that was different?”

An Alternative to Surgery

During Susan’s exam, the doc tested many things. “This is different!” she thought. At the end of the exam, the doc told her the good news. “A lot of this pain will go away, and there are several things you can do at home to help your body to heal.” She couldn’t believe it! Suddenly she noticed her leg pain was gone! With renewed hope, Susan went home and began performing the exercise the doc gave her. Each morning during her workouts, she noticed it was easier and easier to get warmed up. She was even able to lift heavier weights than she had in years. She was thrilled!

At follow up visits, she and the doc began working on the more underlying issues that would help resolve her pain for good. Each time she felt better and better, and she continued to exercise and the pain she had during the day began to go away!

Susan is now working out every morning, is able to work pain-free during the day, and able to enjoy walks with Carl at night. Susan did not need surgery, and she is feeling fantastic all because she didn’t give up hope!

The Moral of the Story:

There are many options to treat low back pain. Keep searching until you find the one that is right for you!