Why the Right Running Shoes Matter 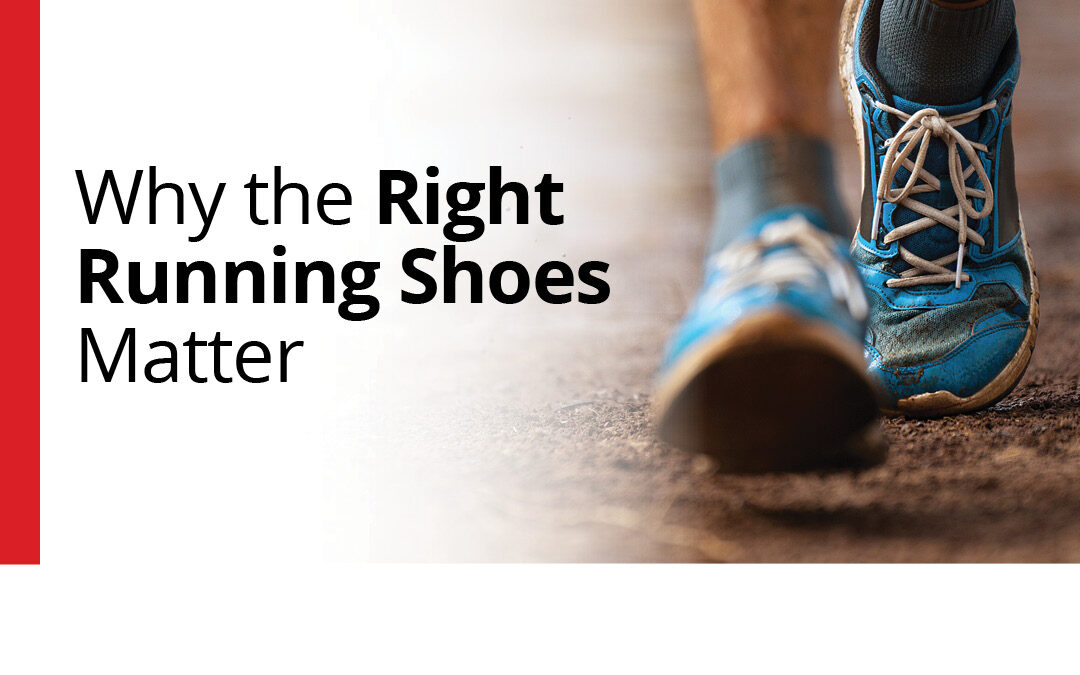 Why the right running shoes matter

Maria was just beginning her running journey. Her new boyfriend was very much into running, and she wanted to try it herself. She already had a great background of fitness and strength training. With her first 10k race coming up, she was in need of new shoes. So, Maria decided to go to a local running store to see what they recommended.

The running store employees were very friendly and helpful. They looked at her running form and at her old shoes and made several recommendations for her to choose from. She selected a new pair and continued her training runs for her upcoming 10k.

Her training progressed, and her training runs got a little longer. She noticed she could keep up, but her left knee would start to hurt around 3 miles. Continuing to run would increase the pain until it felt sharp and very sore. She decided to take a couple days rest, and the knee pain went away. “Great!” she exclaimed, “I need to get back to training.” Since it had been a few days, she was very eager to run again. She got started and felt normal, until… around mile 3 her left knee pain came back. “Ugh! Why is this happening?”

Maria took another couple days off from running and instead hit the gym for some strength training. She started her workout with squats and felt great. Next up were walking lunges. BAM! Her left knee pain came back. Maria finished her workout, and took several more days off, but now she was worried that she was falling behind in her training and wasn’t sure if she would be able to complete her 10k coming up in just a few short weeks.

Several days went by, and Maria was again feeling like her normal self. “Great, it’s time to get back to running!” Her training plan called for 5 miles that day. She started off slow and worked up to her pace. The longer route took her up and down some new hills. She was looking forward to the new challenge. As she passed mile 4, she came to the first downhill. She smiled as she ran down. But halfway down, a now somewhat familiar sensation in her left knee came back. “Oh no,” she thought. “But I have to finish this run.”

She toughed it out and kept going. The knee pain didn’t increase but she could definitely feel the sharpness with each step. She rounded her last corner near the end of her run and felt a new sensation. Now her right knee was hurting too! She finished the run, popped some Advil, and told her boyfriend about her knee pain. “You should get that looked at,” he said. “You don’t want to have to deal with it every run!”

She Googled “knee pain from running” and looked over the results. “This place looks great,” she said and was able to book an appointment online near her apartment with a sports chiropractor the following day. She was eager to get answers, but she was worried she would be told not to run and wouldn’t be able to complete her race in two weeks.

At her visit the doc explained they were going to examine her knees, hips, low back, and feet. He explained that knee pain can come from each of those areas, and with her race coming up in a few weeks, he wanted to be sure they found the right area to begin treating. He was very professional and thorough. Near the end of the exam, he asked if the shoes she wore were her current running shoes. “No, those are my old ones.”

“What are your new running shoes?” She told him it was a stability shoe, and his face lit up.

Smiling warmly, he said, “I have great news and some bad news.”

“You need to buy new running shoes,” he answered.

He smiled ever bigger and said, “Your knees and everything else check out fine, and you’ll be able to run your 10k race.”

Unable to contain her excitement, Maria began beaming with happiness! She was so excited she would be able to keep running!

The doc explained her knee pain was due to her switching from her original neutral shoes to the stability shoes. Because of the stability shoe, her foot couldn’t go through a normal movement called pronation. “Pronation of the foot is what allows us to shift our weight from the outer part to the inner part of the foot. If we can’t shift to the inner part of our foot, we end up running more on the outer foot which puts extra stress on the outside of the knee. Your new running shoes weren’t allowing you to pronate your foot, so you were overstressing your outer knee during your runs. If you go back to a neutral shoe, you won’t have that problem, and your knee pain will go away!”

Maria raced to the running store to look at the neutral shoes and found a pair she liked. Her training plan had her running 3 miles that day. She decided to test out the new, neutral shoes. She got to the third mile waiting for the knee pain to hit, but much to her surprise, it didn’t! She ran another half mile and noticed some mild knee discomfort in her left knee and no pain in her right!

Maria was able to continue her training, and a week later, she ran her 10k with absolutely no knee pain! “What a difference the right shoe makes!”